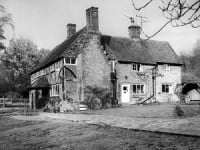 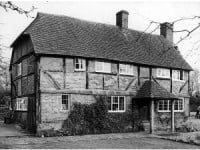 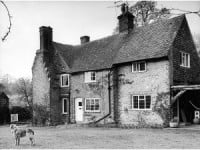 Norney Old House is indeed one of the oldest houses in Shackleford and was researched by the Domestic Buildings Research Group (DBRG) in the 1980s. At one time the house was divided into two dwellings, which may account for the two inglenook hearths.

Here is the DBRG report together with all the sketches. Alas, some of the original features such as burn marks made by the old rush-light tapers were painted over by the previous owner.

This four bay timber framed house has the smaller smoke bay in the centre. Framing is in square panels with curved outside corner tension braces. Similar braces also frame the smoke bay. The roof structure is clasped purlin with straight wind bracing and three queen struts up to the tie. date, late sixteenth century. The roof is half hipped, which is general for a smoke bay house built before chimneys. A stone wing was added at the back. It had an outshot on the north side. A stone outside end chimney was added to the unheated parlour in the seventeenth century. Probably the central hearth room was given an inglenook hearth a little earlier. The inglenook hearth was built in the back wing in the eighteenth century. It has a large bread oven.

The house faces west. It retains the timber framing but has been under-built in brick to the ground floor. The cill is coursed stone with ironstone galleting. Framing is complete to the first floor with corner curved tension bracing. The roof is half hipped to the north end and it was probably built out on the south end when the chimney was added. The three queen struts at this end are typical features of a smoke bay house. The fine added chimney stack has crow steps on both sides. The hearth back is built of semi-coursed undressed stone up to the stack, with brick quoins in twos. The added north wing is of similar materials with similar quoining. A twentieth century addition, in line, extending back to the north is in keeping.

The front door is into the smaller central bay, in line with the inserted central chimney. The plan is of three rooms on the ground floor, with only the central hearth room facing first the smoke bay and then the brick hearth. The service room was to the north. The unheated parlour was to the south.

Here’s how the house was advertised in 2008: