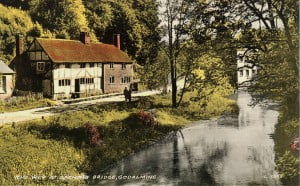 Eashing was formerly a far more important place than many of its now larger neighbours like Elstead and Shackleford. Its wealth derived from the River Wey which divides Upper and Lower Eashing and which regularly floods, even now. The name probably derives from the ash tree, of which there are plenty nearby, with the ‘ing’ suffix denoting a field or meadow.

Most of Eashing was owned by Ezra Gill in the 18th century, and in 1773 he drew up a beautifully detailed estate book which is now in the Surrey History Centre and which is reproduced elsewhere on this site. At this time Eashing was a small community of framework knitters, linen weavers and other craftsmen.

For many years the most well-known sites in Eashing were Eashing Park and the Mill, both now demolished. The site of the mill, whose history is related elsewhere on this website, is now a business park.