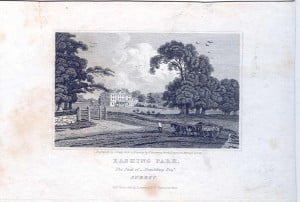 Eashing House was a Palladian style building erected between 1729 and 1736 by Ezra Gill, the owner of Jordans and a well-known Quaker. He died in the year of its completion and the big house was occupied by his descendants until 1929 when Miss Agnes Seymour Kerr died.

From the 1880s until 1900, the mansion house was leased to Lord Penzance and his grave and that of his wife are in Shackleford Churchyard. Lord Penzance was well-known as a grower of hybrid sweet briar roses. Miss Seymour Kerr left the estate to her cousin James (then aged 11) who was the younger son of the Earl of Antrim. The Estate was sold in 1943. In 1940 the house had been requisitioned for use by the Highland Division and later by Canadian and New Zealand Troops. After the War it fell into decay and was demolished in 1957. A smaller house was built on this site and the Coach House converted to domestic use. The nearby Brew House dates from the 16th Century.

The article below is reproduced from Country Life, December 30, 1889.

Lord Penzance was appointed an Exchequer judge in 1860 but he did not resign his ecclesiastical appointment until early in 1889, though from 1872 to 1875 he lived in retirement at his beautiful country seat in Surrey. His house at Eashing was a place of plain substantial comfort, lying in the beautiful country near Godalming in Surrey and commanding a beautiful view of the valley opening out towards Pepperharrowe and the wild heaths about Frensham. It is a part of the country endowed with many charms, for it is delightfully varied in character and possesses many splendid trees.

Although Eashing Park is comparatively modern, the location is old and many indications of Tudor times are to be found in and near it. The old laundry is an example of the extremely quaint and beautiful architecture of our ancestors in those days, and there are old brick walls and garden seats overshadowed by trees that belong to the former time.

The broad grass terrace, with its open-work brick parapets, commands a superb view over the landscape, and the garden is approached from the house through a belt of magnificent beeches. Those who are privileged to enter it find it a radiant realm of roses, for this was the flower that the Lord Penzance loved more than all, and he proved himself in dealing with it a gardener of imagination and resource. No kinds of roses are now more famous than the Penzance hybrid sweet briars and perhaps, long after the disputes of the Court of Arches have been forgotten, the name of Lord Penzance will be remembered in association with the wonderful varieties of roses which he made truly be said to have created. In his later years he frequently wrote to the horticultural papers on his favourite topic and he prepared a paper on the subject for the Royal Horticultural Society so that he may fairly be ranked among the famous hybridists.

Of note is the Ice House in the grounds of Eashing Park, near the entrance to the driveway. This large cavernous room was used for preserving food and is believed to have been built by Lord Antrim during his occupation of Eashing Park.

Underneath the Brew House are cellars, and excavations at Owl Cottage also revealed cellar passageways.