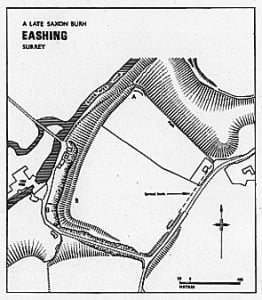 A Burh is a defended settlement dating to the Anglo-Saxon period, built to defend against the Viking invasion.

The Burghal Hidage is the name given to a document which appears to list the burhs, or fortifications, of Wessex circa A.D.920. The document not only gives the place-name which enables the site to be located in general terms; it also gives an assessment in hides which allows the length of wall to be maintained and defended to be calculated in terms of feet or metres. This note is an attempt to locate topographically the site of the burh at Escingum.

The Burghal Hidage mentions Sashes on the Thames and six hundred hides belonging to Escingum. The next place-name is Southwark. The layout of the text makes it clear that Escingum is the burh that comes in the circuit between Sashes and Southwark and the identification of the Burghal Hidage with the ham atAescengum in Alfred’s Will, present day Eashing, has never been questioned.

The ending of the Burghal Hidage enables us to convert the six hundred-hide assessment into a length of wall to be maintained and defended of 2475 feet (755 metres). With the mediaeval predilection for rounding off figures the figure of 600 may actually represent anything between 550 and 650 hides; in other words the distance may be between 2063 and 2887 feet (629 and 881 metres). It has been noted that for many sites that part of the circuit which is not covered by major water defences is not included. We are therefore looking for a site which has a defence of approximately 2475 feet, either in total or excluding a major natural obstacle.

It is clear that one site at Eashing is the probable position of the burh. On a cliff overlooking the site of the bridge is a promontory between two small valleys. The site is centred at National Grid Reference SU943437.

The site is on the high river cliff on the Wey which consists of the Bargate Beds, part of the series of Lower Greensand deposits which here form the western edge of the Weald.

The position of the Eashing bridges would lead one to believe that the cliff face has been stationary since the early Middle Ages. Neither the small quarry near the mill, the mill works themselves, nor the small landscaped path of the last century have altered the essential topography of this considerable natural defence.

On the north side the dry valley rises to meet the road but for all of the length where the burh wall abuts there is a considerable escarpment. The eastern side of the site would appear to be marked by a lane, this would be in the ditch, as there are clear indications of a spread bank above the lane. This bank, whilst not of a striking size, is perfectly acceptable when compared with other spread banks of the period. The similarities with Cricklade, Wilton, etc. are noticeable. The south of the site is another dry valley, with a lane running at the bottom. The action of traffic, frost and water has reduced this to a hollow way, which serves to accentuate rather than obliterate the topography or this side of the site.

In the opinion of the present authors this site is most likely to represent the burh at Escingum. It is on the Royal Domain and is comparable with many other sites in its utilisation of the natural features and the length of the circuit, which is not covered by the escarpment and the River Wey. In other words the distance clockwise from A to B on the figure is 2130 feet (650 metres), comfortably within the length we are seeking.

The site may well have gone out of use in the reign of Athelstan when it is possible that a reorganisation of sites took place, the burhs in isolated places being replaced by defended mercantile settlements in areas where trade flowed more freely. The site at Eashing may have been replaced by Guildford, a site with a strong strategic and commercial role on a route centre – the crossing of the navigable River Wey by the ridgeway.

With its relatively undeveloped interior and its short term of occupation, (perhaps as little as 50 years, i.e. A.D.880 to 930), the site might reveal a great deal of archaeological information about the nature of the late Saxon town foundations.