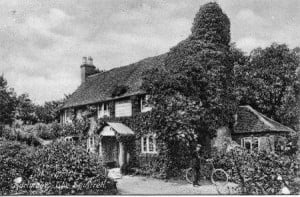 After 1907 the pub did not appear again in the directories until 1938, this time as a beer-house occupied by Norman Paine. The 1904 return, however, notes that The Squirrel had been licensed before 1869; the occupant was Charlotte Edgeler and the owner Bruford’s Cranleigh Steam Brewery. A James Edgeler was listed as a beer retailer at Hurtmore in Kelly’s 1885 directory and a Mrs Edgeler was still listed in 1889. In the 1980s it was briefly turned into the Alpine Tavern, to universal derision. Later, the adjacent 18th century cottages were converted to accommodation.

More recently the pub was the subject of much speculation when the popular and gregarious licensee Nigel Wilkes disappeared one day and was never heard of again – at least under that name.