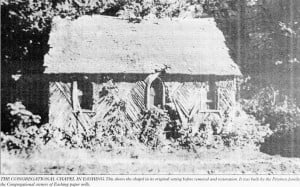 This little building used to live on the bank almost opposite the Stag. Here is its story, written by Nigel Swansborough, one of the people who eventually restored it.

In 1857 a small group of residents from Eashing village became alienated from the established church by ‘ritualistic practices’ and were looking for a place to meet and worship.

Samuel Pewtress of Camberwell, London, the owner of Eashing paper mill, gave a plot of land and, together with a Mr. Appleton of Elstead, funded the purchase and erection of a twenty-seat prefabricated chapel. This was to be used as a station of Godalming Congregational church alongside the two existing village stations at Wormley and Milford (the building of Milford chapel was also funded by the Pewtress family).

Evening services were first held in 1858 and conducted by Mr. Eade, a lay preacher from Godalming who divided his time between Eashing and Wormley. In due course a Sunday school was formed with 40 children and five teachers. A note in the Surrey Mission report of 1864 says “the chapel is too small for the numbers who attend and frequently service is held in rooms belonging to Mr. Pewtress”.

In 1864 a Congregational church was formed in its own right, initially with 11 members but this number steadily grew until 1866 when Mr. Eade died. George Eade, son of the former preacher, was appointed to the oversight of the chapel, but at times the work must have been very discouraging, especially with regard to the Sunday school, it was claimed the established church used “both bribes and threats to prevent people from attending”. Numbers began to decline and, in 1869, George Eade died suddenly.

For a short time services were supplied by students of the Surrey Congregational Mission until in 1870 Eashing and Milford churches were united, and Eashing once more became a station of the Godalming Congregational church. The chapel continued under the guidance of the ‘mother church’, the preachers being: Mr. Sheward (1870); Mr. Shalberg; Mr. W. Falconer (1877-1883); Mr. T. Poole; Mr. Hedgelong; Mr. Mapstone; Rev. G. S. Martin and finally the Rev. H. E. Sumner who was appointed in 1905. However the work at Eashing fell into decline and in 1909 the cause was disbanded.

After this time the records of the chapel are very hard to come by. However the Kelly’s Directory of Surrey for 1927 states “in Eashing Hollow there is a small chapel of wood holding 20 persons, the verger being Mr. Henry Stocker of SS Peter and Paul, Godalming”.

A map of the locality dated 1942 shows the chapel and notes it as a Church of England chapel of ease. I have also spoken to several parishioners who remember the building being “laid out as a chapel” during the Second World War. 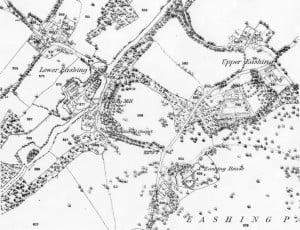 In or about 1950 the chapel was acquired by Mr. S. Bridgewater of Eashing as part of a smallholding. So far as I can ascertain its uses were as a log shed or timber store and later a chicken coop. The chapel building gradually fell into disrepair until it was removed from its site at Eashing Hollow and taken to the Old Kiln in 1994. 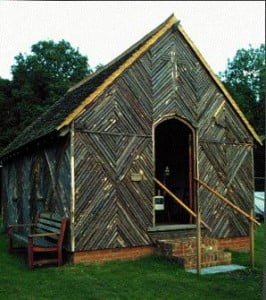 Since arriving at the Rural Life Centre as a “kit of parts” in 1994 the old Eashing chapel has undergone a transformation.

After many years of disuse at Eashing, the building was offered to the Rural Life Centre by the Surrey Historic Buildings Trust. The trust was concerned about the dilapidated condition this historic building was getting into and also the threat of demolition and replacement with a modern structure.

After its retirement from public use as a library, the former chapel had been wheeled across Eashing Bridge to a new site below a steep sand bank. Here it had been used for various agricultural purposes, including as a chicken coop, and for storage. The windows had been replaced with chicken wire and sheets of polythene and, generally, the building was allowed to fall into disrepair. Its proximity to the bank allowed water to come into contact with the back wall and roof causing widespread rot, and the structure was overgrown with brambles and weeds.

It is now fully restored and open to the public, clad with split sweet chestnut rather than the larch of its original state.

It is  a sign of the times that Lower Eashing now (1999) contains only one resident who was here before World War II and she is now approaching 80 years of age. She remembers as a small girl (i.e. presumably in the early 1920s) being brought by her parents to Sunday services in the old chapel – and with other children searching for dropped farthings in the old mill beforehand to put in the collection!

The chapel, she says, was originally on the western side of the bridge, where at some stage before WW2 it was in use as a library, run by the two ladies who at that time owned my house, Tankards. She remembers it being put on wheels and moved over the bridge to its more recent site opposite Pewtress Cottages, but is not certain when this happened, nor at what date it ceased to be a chapel and became a library.

In more recent times it was owned by the Bridgewater family who lived opposite it at 2 Valley Place, and the late Mr. Bridgewater used it largely as a tool shed. His son Stephen donated it to the museum after the Surrey Historic Buildings Trust took an interest in its preservation.