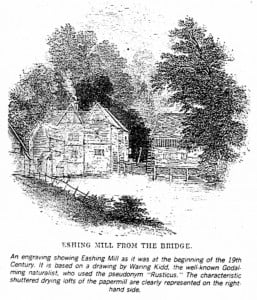 At the time of the Domesday Survey in 1086 Godalming had three mills, valued at 41s.8d. (£2.08). These were probably Eashing, Westbrook and Catteshall Mills on the River Wey. However, this is not certain as later they were four other mills: Enton, Rake, Ockford and Hatch, on the river Ock, a small stream which joins the Wey near Godalming Church.

Originally these mills all ground corn, but at some of the sites the available water power was also used for other industries including fulling woollen cloth, paper making, silk manufacture, preparing leather and, until recently, engineering.

The early history of Eashing Mill has not been researched in detail. However, on August 3rd 1658 John Keane sold his corn mills at Eashing to William West, paper maker of Wraysbury in Bucks..

West established at Eashing what was probably the second paper mill in Surrey, Stoke Mill near Guildford having been founded in the 1630’s. He died in 1673 but his widow Judith and son John carried on both paper making and corn milling until 1696.

The mills were then bought by Thomas Hall, whose family was active at Eashing for well over a century. Indeed, until 1799 the mills were owned by three generations, all named Thomas Hall.

Up to this time the paper produced at Eashing Mill had been made by hand. The paper-makers made individual sheets of paper by dipping a wooden frame covered with a wire mesh into a vat of pulp made from rags. However, the new owners immediately closed the corn mill and installed a paper-making machine which made continuous rolls of paper.

The mill was destroyed by a fire in 1852 but it was rebuilt and the owners also constructed a terrace of houses for their workers, which is still known as Pewtress Cottages.

The census returns of 1851 for Eashing and neighbouring Hurtmore provide interesting information on the paper-makers and their families. For example, four of the 13 men recorded as paper makers and the wives of five others were born at Iping or nearby towns and villages in Sussex and clearly moved to Eashing when Pewtress & Co. purchased the mill. The ages of the workers ranged from 15 to 62 and there were two apprentices aged 11 and 12.

In 1865 when the mill was offered for sale there were 98 employees. It contained 15 beating engines for making pulp, powered by two water-wheels and the steam engine, and two paper-making machines 60 and 48 inches wide. The mill could produce up to 10 tons of paper a week for The Times and other newspapers and journals.

It does not seem to have been sold immediately, but William Bishop took it over in 1869 and with the help of his manager Thomas Sweetapple, son of the former owner of Catteshall Mill, ran the business until 1889.

By this time most paper was being made from either esparto grass or wood pulp, both of which were imported from overseas, so that large paper mills were being built at the coast, resulting in inland mills like Eashing being forced to close.

The works later became a flock mill and suffered a serious fire in 1960. It was restored as a two-storey building and during the 1930s was operated by Louis Major, making flock for mattresses and upholstery.

Drawings of the old mill at the beginning of the 19th century and later in the 20th century accompany the original article.