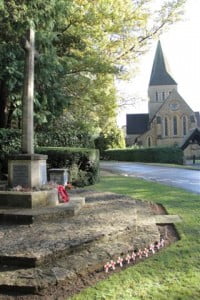 The war memorial opposite St Mary’s Church stands on land given by Col. Hadaway of Grenville and commemorates the dead of both world wars. It is in the form of a plain cross of Doulting stone, partly enclosed by a low wall of Bargate stone with Yorkstone coping and is now Grade II listed. Here is its story:

A Charitable Trust was set up to erect a memorial in memory of the men of Shackleford and Peper Harow who gave their lives during the Great War of 1914 – 1918.

The site was given by Col. G.R. Hadaway, J.P. (Royal Artillery) of Grenville. The memorial was designed by Mr. R.H. Butterworth of Milford and erected by Messrs. Avery of Farncombe. The Bargate stone for the wall and paving was provided by the Earl of Midleton and the carting of materials organised by Mr. W.E.Horne, M.P., later Sir Edgar Horne of Hall Place (now Aldro).

The Unveiling and Dedication Service took place on Sunday, November 6th, 1921. The Revs. J.C. Montgomery and W.A. Shaw, rectors of Shackleford and Peper Harow respectively, officiated, with Mr. J. Williams, the organist at Shackleford church, at the piano.

In February 1922 the site was acquired by Godalming Rural Parish Council.

In 1939, as a precaution, the lettering on the memorial was filled in to hide the names and restored in January 1946. In October 1948 the Council agreed to the addition of the names of those who had died during the 1939-45 War on panels placed at each end of the semi-circular wall. At first there were four names but in March 1949 it was agreed to add the name of Second Lieut. K.R.W. Buttemer. As an afterthought it was decided to add ‘1939-1945’ above the names. The original work was completed in June 1950 and some repair work was carried out in the 1960s.

In 2004 it was refurbished largely at the instigation of a nearby resident, Quintus van Koetsveld, who raised funds and organised both the refurbishment and the re-dedication.

The six panels were replaced with hand-cut letters in York stone by Sussex Stone Masons of Littlehampton.

23675 – the memorial opposite the church