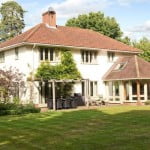 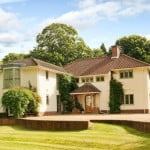 The land on which this house stands was bought by the Church Commissioners in 1955 from the Salvation Army (who also owned Shackleford House nearby) in order to build a smaller and more manageable rectory than the existing one and fulfilled that function for 30 years.

When several benefices combined in 1985 the house was sold and became a private residence, later a bed-and-breakfast going by the name of Seven Pines. The garden never contained seven pines; they just looked as if they formed the shape of a figure 7 from the Cyder House, or so the story goes. In December 2000, no longer a bed-and breakfast, the house was known as The Pines and was imaginatively extended and modernised.

In the deeds the property is referred to as a ‘parsonage’, meaning that it was the residence of either a Vicar or a Rector, and when the present owners bought it in July 2007 they decided to give the house a name that was historically appropriate, which is how it came to be called The Old Parsonage.