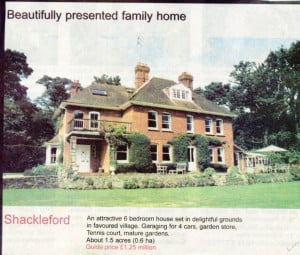 Snape House (known originally as Grenville Lodge) was built by Col. Hadaway who was married to the sister of Lady Caroline Grenville, who lived at Grenville. The sisters were the daughters of the Duke of Buckingham. Col. Hadaway was in H.M. Army and his wife died while returning from India and never lived in the house.

7th November 1890: Indenture between John Cates Collier of the first part (Vendor), The Rt. Hon Stephen Earl Temple, The Hon William Fielding, Major General in H.M. Army and Alexander Hadaway Esquire of the second part, George Rowley Hadaway, Major in Royal Artillery of the third part (purchasers) land together with certain other adjoining lands amounting to some 17 acres and 10 perches. Plot 11 (Grenville Lodge) amounted to 2 acres 20 perches. Any building erected on the plot not to be less than £500 in value and all elevations to be approved by the vendor’s Surveyor. “New Road” referred to became the Peper Harow to Godalming Road, then subsequently the Elstead Road.

29th January 1901: Indenture acknowledging rights of the purchase between the vendor on one part and the Rt. Hon William Stephen Earl Temple and Alexander Hadaway. Col. And Mrs Hadaway’s daughter lived at Grenville until it was sold, then they moved to Priorsfield Road.

1st May 1933: Ida Hoare sold to Henry Charles Hony from Wiltshire and Henry Lionel Brutton (a solicitor) of 36 Bedford Row for £2000.

In 1940 the grass tennis court (sited towards the church) was turned into the kitchen garden.

From 1940-47 the house was let to L.A.G. Stren (the author) by the Honys. It ended in Court as the Strens allowed the garden to go wild.

1947: The house was sold at auction for £5850 to Donald Millward Marston who was with the Baltic Exchange.

1949: Donald Marston sold to Phyllis Horsfall Watson of Munstead Oaks, Godalming for £6950. (the name was then changed to Snape House). Mrs Watson lived there with the family nanny (“Nanny Avis”) with a full time Housekeeper and Gardener. Her granddaughter is Samantha Eggar the actress. Mrs Watson moved out on her 88th. birthday with “Nanny Avis” and died approximately six years later in Godalming.