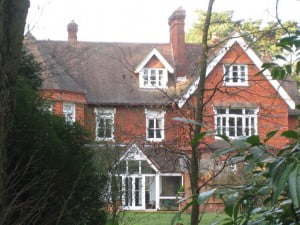 Built in 1875, this was the second ‘Shackleford House’ in the village. The first, on the site of Aldro School, was built by Sir Edgar Horne.

In 1872 Shackleford Heath was sold as ‘Shackleford Estate’ by Lord Midleton of Peper Harow. The triangular plot in this offer included the land either side of Grenville Road, up to Shackleford Road and over to School Lane, but excluding St. Mary’s and the Church. The land was divided into 15 plots but only Shackleford House and Grenville House were built in the 1870s.

Advertising for the plots suggested, “now that your son has moved to Charterhouse, have a country house near him,” stressing the rail connection through Godalming. (Charterhouse School was established in Godalming in 1872.)

Shackleford New Road cut across the site, becoming Grenville Road in the 1970s.

The Shackleford House property gradually expanded to 18 acres, including three acres across the road for sewage disposal. The main house was serviced by a gate house, a stable block with a glass-covered grooming yard and a cottage. The present bridle path around the property was called Occupation Road.

It appears that Shackleford House was rented as a country home (presumably by parents of Charterhouse boys !) until the early years of the 20th century. Various names are listed in the parish records at the Godalming Museum library.

In 1922 Mr. McAndrew bought the whole property when he married. He belonged to a Liverpool shipping family. The McAndrews had two sons and one of them made contact with the present owners in 1993. He was able to provide a lot of interesting information, including the installation of an electricity generator in 1934. Up to his death Mr. McAndrew regularly visited the home.

Mr. McAndrew was involved with the board of Dr. Barnardo’s and gave the property to the institution after the Second World War, having previously moved near Box Hill. Canadian troops were based at the house in the run up to D-Day. 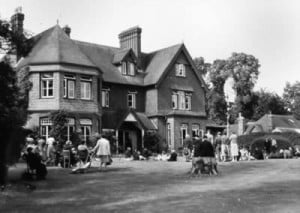 In 1947 Dr. Barnardo’s converted the house into a home for around 25 children. This was closed in 1963. Since the present occupants have lived there, they have been visited by about fifteen of the boys, being in regular contact with three of them and their families.

After the closure an ex-teacher from the home tried to run the property as an approved school for girls. This only lasted about nine months, according to one of the girls on a return visit.

In 1965 Harold Beere, a local antiques dealer, bought the property and divided the house to form a second home out of the east wing. He also divided the front garden.

The Shepleys bought the Shackleford House part in 1971, which included about 13 acres of garden, paddocks, orchard and woodland, and stayed until about 2000.

The original property now comprises four homes, the other three being: Kingsworthy (the east wing and half the front garden), Moorcroft, which was the site of the original stable block and has a garden adjoining the bridle path (the covered grooming yard was demolished in 1972), and Dormy Lodge (based on the original gate house).