Norney Grange was designed in 1897 by Charles Voysey for the Reverend Leighton Crane. He extended the main house in 1903 beyond the westernmost gable. Here it is, photographed in 2021. 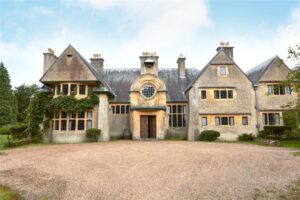 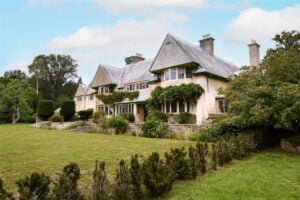 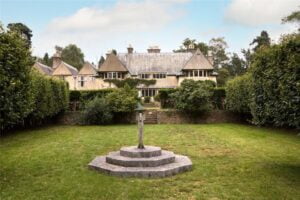 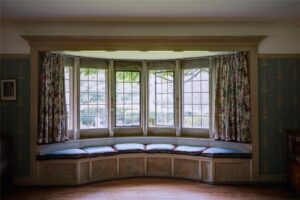 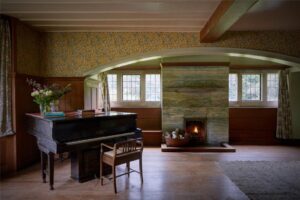 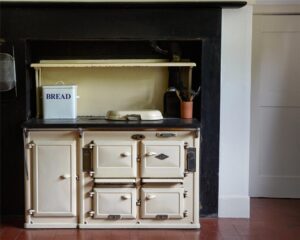 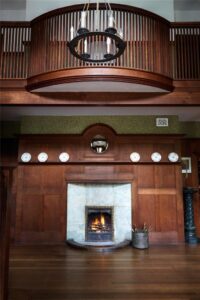 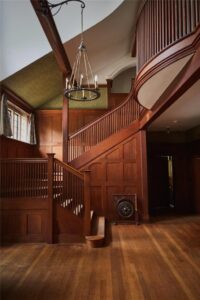 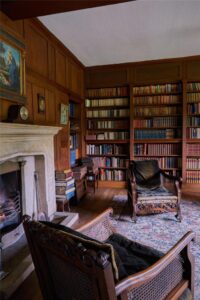 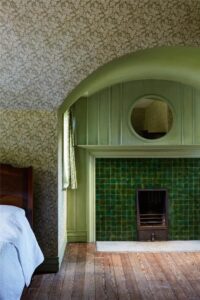 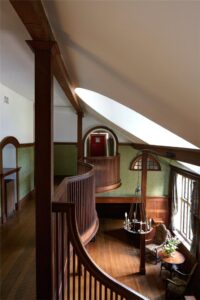 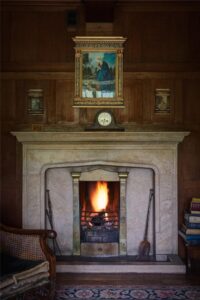 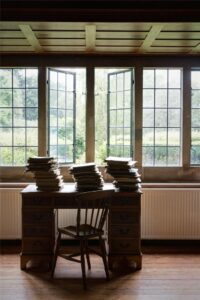 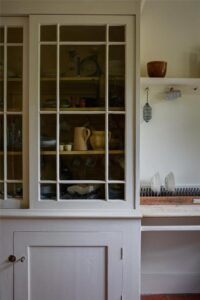 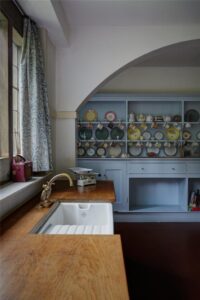 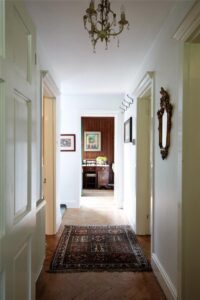 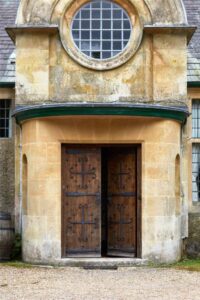 Voysey belonged to the Arts and Crafts movement. Two groups met in London. One was of writers, philosophers and painters (vide Carrington, a French film of which the last twenty-five minutes were shot at Norney). The other, of architects and designers, met in the Bloomsbury offices of Norman Shaw. Both were exploring the changes in British society and therefore the changes in outlook, behaviour and manner of living which resulted.

The railway, which had come to Guildford in 1845 and to Godalming four years late, encouraged men with new wealth to settle around here. Voysey built several houses nearby. He was trying to discover the Englishness in architectural style and he experimented at Norney. Thus the slates on this and on many of his houses are from Westmoreland. The leaded light windows are of Tudor style. At the eastern end the shaped leaded roofs above the inglenooks are of Gothic style. Notice that the walls which surround the drive circle before the front door have an ogee profile, a trace of the Gothic. True, the panelling inside is of Austrian oak, but apparently such trees grew on the nearby common.

He displays, also, some foreign styles: the round window above the front door is Roman. The metalwork on the front door is Belgian art Nouveau. So, too, are the bars for opening and closing windows which you can see from outside or inside the house.

Voysey’s approach was holistic; he designed everything. Thomas Elsey of West London made for him the metalwork gutters, down pipes, door handles, key holes and keys, fireplaces, air vents and hinges. Voysey designed also doors, fitted cupboards and dressers. He designed, for other houses, furniture, tables and chairs. He had designed a billiard table for this house. He disparaged overt decoration and fashions in furniture and wanted it to be simple and functional.

Voysey was, in some ways, ahead of his time. He seems also to have broken his own precepts. The water boxes above his down pipes are decorated with battlements. The art nouveau metalwork is both ornate and foreign. However, does Voysey succeed, with this hotchpotch of styles from different countries and different times, in producing an atmosphere that room is essentially human and wholesome?

Voysey was the son of a clergyman and had strong ethical principles. He valued the family strongly and so he designed high chimneys. These proclaim the warmth below of the family fire and of the family. Also he tries, in this house, to combine the grand – the long north face, the large front hall – with the smaller, the domestic. The western extension is small, lower and full of variety is the windows around the chimney at the eastern end are tiny. The octagonal bedroom within has an inglenook and bay. Voysey breaks the whole to make it seem less grand. He has done something similar in the drawing room.

The house is deliberately asymmetric outside and in most rooms inside. The south, more domestic face is still less symmetrical than the north. Symmetry implies control and power. Much of the front north face is flat and, towards the east, grand. The roof above is full of variety. There are two cross roofs, the main one with a change in pitch. From west to east there is a series of gables of increasing size. Many, on the north side, are flat. However, between the two greatest is a thrusting curved stone porch topped by a large circular window and curved roof. The roof on the western side of that gable used to sweep down to head height. You can still see, on the southern side, the line of that roof. As you approach the front door you can trace, on the northern side of the house, a change in the tone of the pebble-dash, which marks the first western end.

Inside the house and in the garden Voysey inter-mingles circles, bays and ellipses with straight lines and rectangles. He repeats, he recalls and he juxtaposes curves and straight lines. At different times light plays off different surfaces heightening one curve or the other line.

The Reverend Crane first had the lodge near the church built and designed his garden while the main house was being built. He had talked to Lutyens but chose Voysey. They seem to have got on very well; Alastair Service of the Victorian Society wrote:

“But the major achievement of Norney is the intense feeling of unity between house and garden … the loving care poured into the achievement of unity with nature makes for an architectural experience of a high order.”

Voysey is excellent with scale and with proportion. He is good, also, with sight lines. Setting Norney on a gentle slope with climbing plants and with different expanses of lawn, he offers a range of scales and of views of a sensitively integrated whole.

The name Norney Grange is probably a corruption of the name of Reverend Crane as it is clear that there has never been a barn or ‘grange’ on this site.