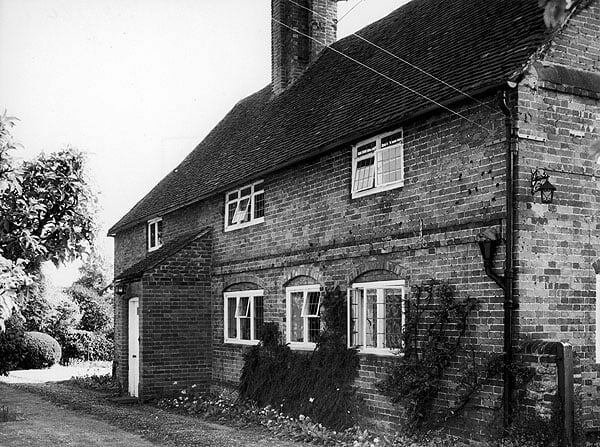 The Stovolds of Cross Farm

The Stovolds have been a fairly local family for hundreds of years. This is the story of how they came to be at Cross Farm in Shackleford, followed by a few anecdotes about the village before the Second World War.

Church records show that Stovolds were at Lydling Farm in the 1880s, although we started to live in it from 1905. My grandfather Percy was the last Stovold born at Polshott Manor Elstead in 1903, so after 350 years there my great-grandfather Ernest moved over the hill to Lydling. Before Polshott Manor we had farmed at Broomfields Farnham during the Middle Ages (it’s now all houses). I do not know why Ernest moved from the family house and farm. Ernest was a small man but a well-respected farmer; he purchased Eashing Park for his eldest son Raymond in the Twenties.

During the First World War all the best horses (17) were taken to France never to return. Harry Davis, who was a great ploughman many years later, looked after a team (a pair of horses) and went off to fight in Kitchener’s army on the Somme. While walking back from the front amid all the blood, grime and mud he heard neighing, and there he found his team after two years; they still recognised his smell!

Most oaks over 40 years at this time in both the farm and village were cut down for the war.

After the War my grandfather Percy brought Hurst Farm, Milford, where the Secretts are now. He started the Rosemead Herd of Aberdeen Angus, (Rosemead was the house in Milford where Bob was born) and kept them for two years in what is now the Refectory Restaurant because Ernest thought they were a bad investment. In 1938 they did a tour of British shows and won many of them. In 1940 Percy and the cattle moved to Cross Farm, the neighbouring farm which had come up for tenancy. Percy moved closer to Lydling to take over the farm In 1958 Ernest died and Lydling house was sold.

Cross Farm in 1900 was a small farm but in 1911 Edgar Horne made it into a model farm with the help of his friend Edwin Lutyens. The dairy boasted huge marble tables, fridges and a walk-in freezer; they were serviced by huge under-ground vaulted water chambers, pumped by the engine house that serviced power to most of the village. It had a very good herd of dairy cows and its own milk round. When Percy took on the farm Sir Edgar was very ill and living in Dolphin House. His first job was to lay straw and hay up Shackleford Street so that the sound of horses and carts did not disturb the dying gentleman. On Sir Edgar’s death in 1942 Percy purchased Cross Farm.

During the war three German prisoners of war lived in the engine house and worked on the farm. According to my father two where pleasant enough but one was a real Nazi. One of them came back in 1978. The Home Guard used to march from Puttenham to Shackleford; they had one Bren gun, which was jolly heavy. Albert Watt’s father, who was in charge of it, made his younger brother carry it between villages, and took it only when he entered the village. The Canadians were posted here during the war and they befriended many locals. My father (Bob) still keeps in touch with one of them. They gave many gifts and would always want to play card games.