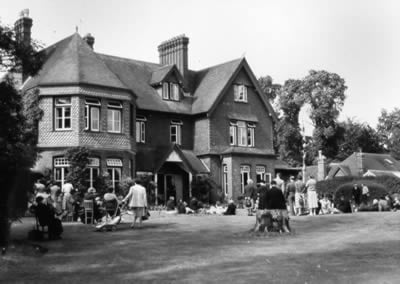 Kingsworthy was originally the east wing of Shackleford House and was split either in 1958 or 1965 (accounts differ).

Prior to this the house had been owned by a Mr MacAndrew, a director of Dr Barnardo’s Homes; he gave it to the charity in 1946 and it was used until 1960 as one of their boys’ homes. In summer Mr MacAndrew used to judge the boys’ allotments, giving a prize of 2/6 (12.5 pence) for the best one, and at Christmas he gave them prizes if they knew the names of all the rigging, etc. in ships. In 1960 it re-opend as a training school for girls and closed finally in 1964. The  photo shows one of their garden parties.

During 1944-45 it briefly housed Canadian troops preparing for the D-Day landings in Normandy (See The Rodeo for other Canadian activities in Shackleford).