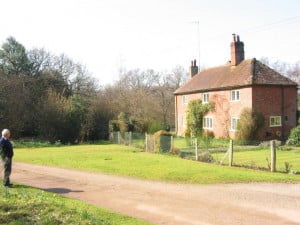 The house is in the hamlet of Gatwick on the outskirts of Shackleford and is found at the end of a private road off Lombard Street. Kingshott Cottage was built about 1750 and in its original form is exactly the same as Brookside owned by Mrs. Iris Cole

The Kingshotts had lived here when the father was the head woodman on the Peper Harow Estate, in charge of all game and standing timber. The house had no water or electricity until 1948 and the children used to queue for meals by sitting on the stairs. Although they are often quoted as having had twenty one children they ‘only’ had 19 children. The other two, who have sometimes been shown in the records as children of John & Amelia Kingshott, were actually his eldest son, Christopher (known as Jack) Kingshott’s children. Finisher, Fin, or Fred (as he was known) was supposed to be the last child, hence the name, but there were at least two others after this. He was christened Finisher Coronation and his initials are carved on a holly tree in the valley. Rumour had it that there was another child and the body is in the well but there is no evidence to back up this story. John Kingshott died on 4th September 1932 at the cottage. Amelia (who was known as Ann – her second name) died on 21st January 1940 at her daughter’s house in Guildford. They had been married at Bramshott on 27th September 1879.

The Kingshott family is now spread out as far as The Netherlands and a recent death in the Surrey Advertiser was a lady aged 92. John Kingshott’s great great great grand-daughter is named Ann Knight and lives in Australia.

‘The Cottage’ was purchased on the break-up of Peper Harow Estate (1947) by Mrs. Vivian Stanley. She let it on short-term leases and also lived here until 1972. In 1947 it was just called The Cottage but when she discovered the history of the property she renamed it Kingshott Cottage.

The bridle path past the house was the old road to Shackleford. This possibly ran from the Cutt Mill.

It is now owned by Val Williamson who has lived there since about 1975.