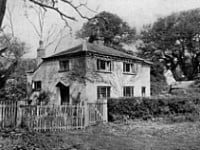 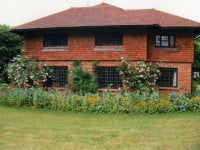 Headlands was once the carpenter’s house for the Peper Harow Estate. Built around 1823, it is typical of the estate houses which all have distinctive windows and the same pattern under the eaves. It was sold in 1944 when the Estate was split up by auction.

Extended on the north side in the 1900s, it remained the same until the 1960s when Alan Chalmers, an architect, bought the house and trebled its size in order to accommodate two sisters in self-contained flats. The look of the house having been thoroughly destroyed with the addition of metal-framed windows and flat felt roofs, the local planning officer gave permission for a complete overhaul in 1990, which gave Headlands its present look.

Unofficially known as the Donkey Cottage because the owner Charlie Knight had a donkey and cart which he kept in what is now the garage, Headlands used to be the home of the postwoman Annie Mackay.

The oak tree is estimated to be over 450 years old.

Philip Gorton has produced a very interesting history of Headlands, with relevance to much of the local history of the area.