Built in 1881, it was called Burdon Hall until 1957. The East wing was demolished in 1957 and rebuilt in 1965. It was a family house until 1939 and from 1940-1944 Canadian soldiers were billeted there. It was then empty until 1947 when Guildford R.D.C. converted it into 3 flats. It reverted to a single residence when Wing Commander and Mrs. Dow bought it in 1957. The previous owners, the Brigstockes, lived here for 33 years before splitting the accommodation in two and moving next door.

The publication ‘Modern Homes’ (1909) has a write-up and a number of illustrations of the beautiful interior which you can see here. 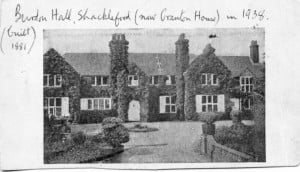 Right: the house still just about known as Burdon Hall in 1938

Here’s how the main part of the house was advertised when it was divided and sold in 2001. 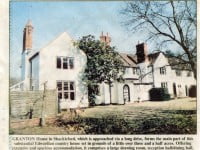 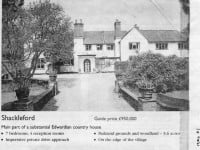