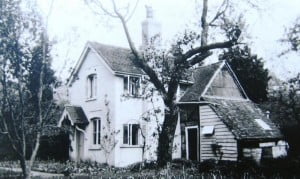 At the heart of Gatwick House is a simple timber-framed cottage that started life as an encroachment onto Gatwick Common. It is not known when the plot was first established but the lord of the manor of Godalming granted a retrospective lease on the cottage and land on which it stands to a widow, Anne Collins, in 1738. The house was originally built as a simple two-bay dwelling of four rooms with an external end chimney. It was tiny even by the standards of the time and it reflected the modest way of life of its early occupants. This section of the house forms a snug nucleus of the dwelling that stands today, for the building has been extended around its original core at various times during the twentieth century. For many years, it was the home of cottagers and agricultural labourers who relied on the resources of the common for their livelihood. During the early 19th century social and economic changes diminished the importance of the common to the residents of the cottage and, during the 1920s, the growing use of the car brought new people to the area. No longer a cottager’s house, it was enlarged and it acquired its present name in the late ‘20s.
You can read the complete history of Gatwick House by following the link below. This history is reproduced by kind permission of the owners.
Gatwick House history
This message is only visible to admins.
Problem displaying Facebook posts.
Click to show error
Error: No posts available for this Facebook ID