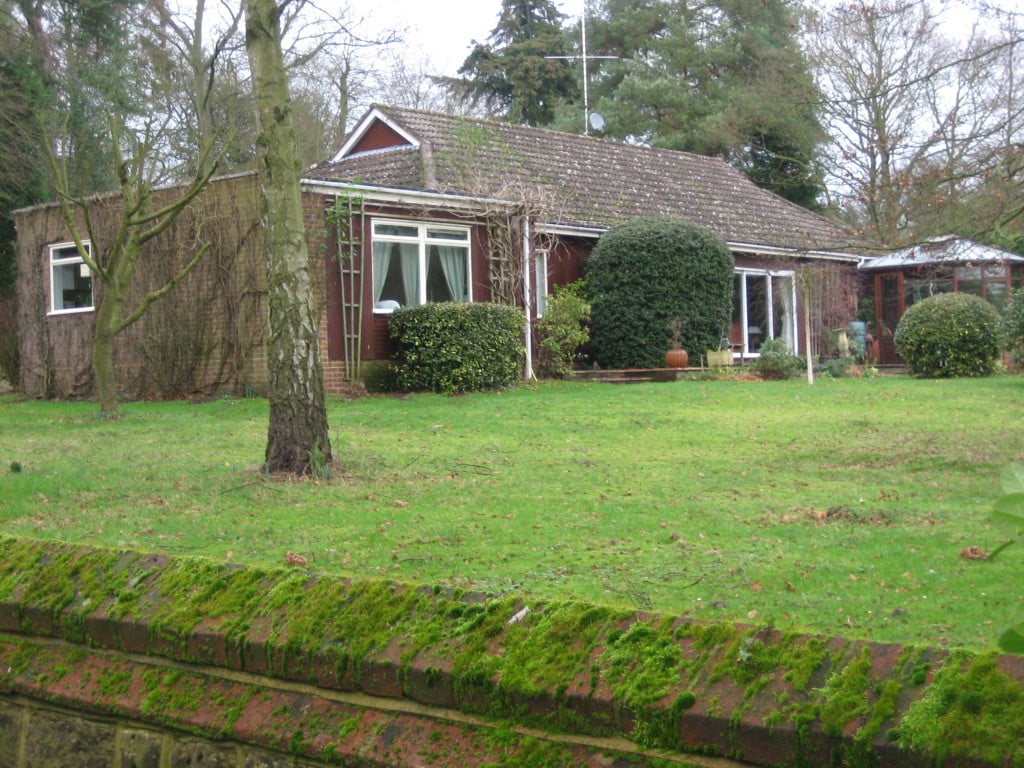 Fairlie Lodge is a wooden-frame bungalow built by Messrs. Marley in 1965. Fairlie Lodge and Cedarwoods in School Lane were built on plots bought from the Old Rectory, owned by Lord Carver. The story is that a John Elton, who had made money out of shipping and had once leased Trerice Manor (National Trust property near Newquay in Cornwall), had retired and wanted to move from a large house south of Haslemere. Driving around he saw Fairlie Lodge being built as a speculative build.

He bought it and changed the specification to increase the size of the kitchen and porch, then built an annexe so that his family would visit him, and he had the flat-roofed extension added very soon after the original build . The rumour is that this was the last flat roofed extension allowed in Guildford – let alone Shackleford! The brick arch which stands incongruously at the end of the bungalow was going to be an entranceway into the annexe. It had a very fine wrought iron gate within the arch which the removal men hack-sawed off during the 1981 move.

John Elton moved into the house during the late 60s with a housekeeper to look after him in his latter years, but his children never stayed in the annexe . He was known to have ferocious rows over the fence with Lord Carver in the Old Rectory, which probably led to the huge Leylandii hedge that now separates the properties.

John Elton died in 1980 and the Hazeus bought Fairlie Lodge in May 1981. The bungalow was somewhat bizarre in having ugly hardboard doors throughout and internal cedar cladding, but furnished with amazing antiques (Louis XV table, chairs and sideboards and 6-8 huge oil portraits of the family past and present). All of these were removed by the family prior to the move – except they didn’t take the housekeeper! She didn’t know where to go and sat in her bedroom with the removal men working around her. Eventually, at about 5pm, a friend of mine gathered her toiletries into a bag, handed them to her, and suggested that as the house now belonged to someone else she really ought to leave. I think she went to stay with Gladys Buttemer in the The Rectory in School Lane (now known as St. Mary’s and owned by Bob & Liz Trendle).

The garden at that time was all woodland; there were over 30 mature trees some of which we started to clear in the eighties and then were finally ‘pruned’ by the 1987 storm which took down a further 10. After the storm we were without electricity for nearly 3 weeks.

The bungalow is timber-framed and cedar-clad. Allegedly built to a ‘high specification,’ it was interesting to note that, when I first went up into the loft, insulation had only been placed in a 12 foot radius of the loft hatch -just enough for the old Mr John to look in for checking – but no more. I think I spent six months buying one bag of insulation a week – it was all we could afford – to gradually line the loft.

Since 1981 the kitchen has been altered twice, the internal cladding removed and the internal layout altered to make the annexe a self- contained flat for the children. Externally, the area around the house has been levelled and paved and large patio doors and a conservatory added on the southern side. In 1985, you could not see the school or Buster’s farm in the summer for trees and shrubs. The aspect is much clearer now.

When we moved in the children were 7, 8 & 9. I brought them here as a safe environment. Within a few weeks they were approached by a flasher in School Lane. The village bobby gave chase on his pushbike but the man escaped in his Morris Minor!

There were very few young children in the village in the early eighties.