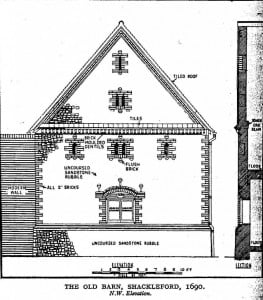 The village of Shackleford is noteworthy for possessing a number of examples of 17th and 18th century domestic architecture. The ravages of modern “restoration” have resulted, as usual, in the destruction of much of the original work but here and then a few picturesque features still survive

Of these fragmentary remains perhaps the gable end of the village shop is the most remarkable. It belonged originally to what was known as ‘The Old Barn’. Here, in olden times, corn was threshed with a flail and sheep were shorn.

To the architectural observer it is the more interesting as exhibiting work of the William and Mary period of which there is comparatively little remaining in Surrey. Though unpretentious and simple in character it nevertheless shows work which is thoroughly characteristic of the period. The cornice with moulded terra-cotta dentils and tile-weathering is a notable feature and the general proportion of the whole enhanced by the graduated narrow openings above combine produced a very pleasing effect.

Alas, most of the original structure has been destroyed, having been long since converted into a general store and cottage.