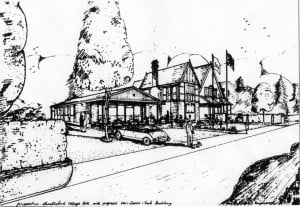 This is an extract from an article written by the Rev. David Payne, Rector 1966-1973, in the Parish magazine dated February 1971(?) when the extension was being planned.

The hall was built in the year 1893 as a result of the inspiration and hard work of a Committee founded by the Rector, the Rev. J.C. Montgomery, as Secretary, with Viscount Midleton as President and Colonel Hadaway as Treasurer. This inspiration was matched by generous giving and a series of “fund raising efforts” in the parish, starting in 1892 with an “American Fair” staged by Mrs. Ewart of Northbrook, which raised £51. Slowly over a year the necessary money was brought in. The cost was estimated to be £570, and the work was done by “Mr. Milton of Witley, who built the Rectory”.

The foundation stone was duly laid on Monday, 24th July 1893 by Viscount Midleton, in the presence of many parishioners, the newly surpliced Choir, the School children and the Rector. “In the course of an earnest address, his Lordship reminded them that this was the second stone he had laid in Shackleford, the first being that of the School, some 25 years ago. He also said that the future success of the Institute depended upon the use the parishioners made of it. One pleasing feature was that almost every person in the Parish had given his or her mite towards the Building Fund”.

Two months later, Tuesday 26th September, the Bishop of Winchester came to dedicate the Building: “a beautiful day, and one to be remembered for a long time, for Shackleford has never been favoured by so many visitors. Punctually at 3 o’clock might be seen the procession of Clergy and the Bishop, headed by the choir, wending their way to the Institute, where they were received by the Committee, and conducted to the platform. for the service. The offertory amounted to £10. Tea was kindly provided in the Schoolroom after the Service. Rummage Sales, Concerts, Penny Readings, a String Band, etc., all helped to raise the outstanding money, and by early 1894 the debt was paid off.

Until the end of the First World War the premises consisted of the main hall as we know it and the house. It was then decided to add an extension to provide toilets, a bar, a billiards room and a small store. This extension was made from timber huts taken down from Witley Camp and the original plaque which used to hang in the billiards room reads: “This room which formed part of Witley Camp during the Great War is a memorial to those who nobly offered themselves that peace might reign ‘Lest we forget that we enjoy the fruits of their self sacrifice’.”

In those days when mass media, public transport and widespread affluence were largely unknown, the Institute was the focus of social life in the Parish. The activities such as the “Penny Readings”, and a lecture on the “Recent Egyptian War” make curious period-piece portraits of a bygone age. School, Church and Institute were bound together in a common purpose. Many of our present-day pensioners will testify to the happy times and lasting friendships formed there in early days. The past 25 years have seen a radical change in our village life. Gone are the “Big Houses”, wealthy patrons of Church and village alike. Gone are many of the old village families.

Gradually we have become a “commuter-village” with a loosening of the ties of a once close-knit community. We could well lose our identity as just one more part of an anonymous Surrey ‘dormitory’. But this need not be. Indeed there has been a most heartening reversal of this trend with the movement back “towards fellowship”. Church, School and Village hall are the crucial hub around which our community life revolves. There is every indication that a modernised, well-equipped and well-cared for Village hall will be the centre of a real renaissance of village life. The vision of the forefathers and founders of this Hall in 1893 can surely best be honoured and fulfilled by our generous commitment to the rebuilding in 1973/74.

For some years there has been a general feeling of awareness in the village of the number of deficiencies in the amenities at the village hall including the rapid deterioration of the timber extension added to the hall at the end of World War I. In 1970 there were held a series of meetings to discuss it.

It really all started as long ago as 1966 when the Social Club asked the hall committee for permission to build a small extension to use as a committee room and for playing cards.

However as Ian Rutherford explains, on examination it was found that the old first war huts were riddled with woodworm and the whole timber extension needed to be demolished.

And so after much thought and discussion by the committee a public village meeting was held in December 1972 when plans and estimates for a new social centre and improvements to the hall were examined. Our honorary architect, Ian Rutherford, who has freely and voluntarily done a mammoth job of work for the extension was congratulated on the excellence of the design.

The money started to come in well and we were very fortunate in securing grants from the Ministry of Education and Science, the Surrey Council, the Rural District Council and the Parish Council amounting to £10,473.

We were also extremely fortunate in receiving an offer from an anonymous donor for £1,000 providing the village would match this sum with a similar amount. We have now had permission to disclose the name of the donor, who is Mr. Percy Fuller, and the heartfelt thanks of everyone will go out to Mr. Fuller for his great generosity.

A summary of the present financial position is as follows:

P.S. The Chairman, Mr. Robin Pilkington, launched an appeal to the village to raise this money and the burden has again been lightened by Percy Fuller who followed up his first donation with a further sum of £500. He also agreed to contribute £750 towards the present appeal providing the village could raise a similar sum.