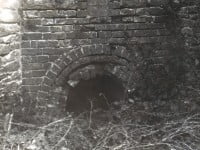 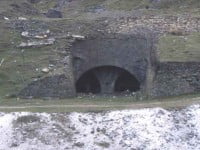 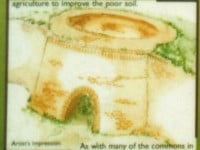 About 20 yards from the junction of Peper Harow Lane and Elstead road there are the remains of a late 18th Century lime kiln, long since disused. Apparently it was restored by a youth group (from Peper Harow?) in the 1970s or 80s, but has now become somewhat derelict again. In 2020 the Coomons Ranger (Vicky Keller) took the initiative to clear 30 years’ worth of trees and brambles to make it visible again from the road..

Gertrude Jekyll in Old West Surrey wrote that wagons brought chalk from a pit to the kilns which were “built in steeply sleeping ground by or near a roadside, where the loads of chalk could be drawn up to their top level. They are interesting wayside objects, and some of them have been over-grown with brushwood, or that stand in what has become woodland, grown up during the 60 years or more that have passed since they were used, have an air of mystery that still brings back to meet the thrill of fearful joy that they excited in my childish mind.”

The larger blocks of chalk, said Miss Jekyll, were built up inside the kiln, which was circular in plan and open at the top, in the form of a rough arch, and the smaller pieces of chalk were filled in above. The space underneath was crammed with furze faggots, and a certain amount of burning converted the chalk into lime.

The remains of another one lie in Norney Farm.

centre: a similar kiln in Bromer

right: an artist’s impression of how the one in Peper Harow Lane might have looked