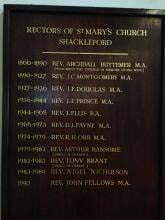 Throughout his years of being Rector of Shackleford, he lived in Godalming. A curate lived at the Hurst-Browns’, Norney Cottage in Shackleford Road. In fact a succession of Curates lived there, the best known being the Rev. W. Wynne-Wilson.

Archdall Buttemer, if you study the registers, managed only a handful of baptisms, weddings and funerals in his 24 years as Rector. The Curate did 95% of the work.

For his family, see the Buttemer Family Bible and inscriptions. His son, Robert William (known as George), was a dilettante/inventor, gentleman of leisure and lived at St. Mary’s (School Lane). He and his wife had three children – Eric (Col. Buttemer), Iris Markwick and Katie Barham. George drove fast cars, including the first or second De Dion Bouton across France, c.1901, and was pipped at the post to be first to Calais, by another driver. George also built an aeroplane at St. Mary’s in the 1914-18 war. He became involved in Spiritualism and séances were held at St. Mary’s.

Eric, Iris and Katie each lost a son; Eric and Gladys’s son was killed in October 1941.

Fred Jones (1883-1970), who lived by the shop, recalled, as a choir boy, Archdall Buttemer apologising for a very short sermon “as he was very tired” !

A large photo of Archdall Buttemer is still in the Church. Around 1971/72 Buttemer’s second cousins from San Diego, USA, visited the Buttemers at St. Mary’s, and they linked up very happily. The brass plate on the wall behind the lectern is inscribed “In loving memory of Robert Lee Buttemer, San Diego USA 1907-1985”.

The Rev. Laurence William Eliot was Rector of Peper Harow for 61 years, 1801-1862. In the last two years he had a Curate! (Who pushed the Bath Chair!?) Surely a course record?

One son, The Rev. Cuthbert Shaw, used to help out in the 1970/80s at Shackleford and Peper Harow. He was formerly Chaplain of Lancing College in Sussex. He lived in the Manormead Clergy Home in Hindhead.

He was much loved in the village, a very caring Pastor. His family of 5 or 6 included:

Irene – single, who lived latterly up at Sherringham. I corresponded with her regularly, and visited her once in around 1970 – a lovely old lady. Irene used to love news of ‘Old Shackleford’ and had a very good memory recall.

Charles (Charlie) – a schoolmaster at Felsted for many years – and Housemaster. A ‘House’ there is named after him.

Jim – a bachelor, lived with his sister Irene, in retirement at Sheringham.

The Rev. Joseph Prince was Rector from 1936-44. He came south from Lowther and Askham (near Penrith) where he had been Rector. One of his parishioners was the Old Earl of Lonsdale (of the Lonsdale Belt/Boxing). He was rather a ‘lad’ and would flirt with Mrs. Prince after dinner Parties, much to her embarrassment!

Mrs. Prince – Dorothy – lived on many years at Kendal, and we visited her, and her priest son, David, in 1967. Dorothy Prince lived on to be 85 or 86, outliving her husband by nearly 30 years. Joseph died only a few weeks after retirement in 1944.

Another son was very seriously anorexic, and refused food. A physician (Dr. Bell), whom we knew from the R.S.C.H., recalled visiting the son in the Old Rectory at Shackleford, and having to climb up a ladder to gain access to his room, in which he had locked himself. He was below 4 stone in weight (I think he later died) – a great tragedy for the family.

The Rev. David Prince had had a breakdown in health, and retired early. But he was active in the life of St. George’ s Kendal, where we visited and saw him in 1967.

The Rev. Joseph Ellis was Rector from 1944 to 1965. He came from Woking. After Shackleford he went to Fontwell Gifford, nr. Tisbury in Wiltshire, where he died in office aged about 86. His daughter Elizabeth is a mine of information on Shackleford.