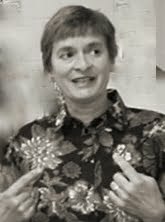 On the evening of Monday September 7th 2009 Jane Bunnett died of cancer. Jane dealt with cancer with the same forthright stoicism that she dealt with all things in life. For Jane she did not “battle with it”, she just got on with it.

Jane first came to the village in the eighties, working at the Mushroom Farm alongside husband Roger. Jane had a passionate interest in plants and wildlife and as a member of the RHS she worked regularly at Wisley while planning and developing their own garden, for which they were recognised with two “Large Garden” Guildford in Bloom awards in the 1990s.

Together they were great supporters of the local community and for 20 years Jane ran, provided for and organised the majority of plants for the Fete plant stall, a major contributor to the Fete’s popularity and financial success over two decades. Many gardens in Shackleford and the surrounding area have flowers blooming as a result of her gifts, along with the War Memorial for which she provided flowers and tended for over 20 years.

A founding Trustee of the Churches Heritage Trust and long-time member and dedicated worker for Towards Fellowship, Jane kept any committee very much on its toes with her astute and down-to-earth assessment of any proposals. For many years she provided many of the ideas for TF outings, visits and fund-raising whilst always being among the first to volunteer for the practicalities of these events; hard work was not something she was afraid of. Besides this she acted as support and confidant for Roger in his roles as Chairman of the Parish Council and member of the Village Hall Committee. A formidable team.

Jane came from farming stock and maybe this led to the individual she became. She was strong and tough and an astute judge of character. She would not suffer any nonsense from people – and spoke her mind in strong language if necessary.

Though an independent spirit Jane was also a devoted wife to Roger, happily married for over 40 years. On their 40th wedding anniversary they celebrated by taking over twenty of their friends from the village for a wonderful evening at Goodwood House.