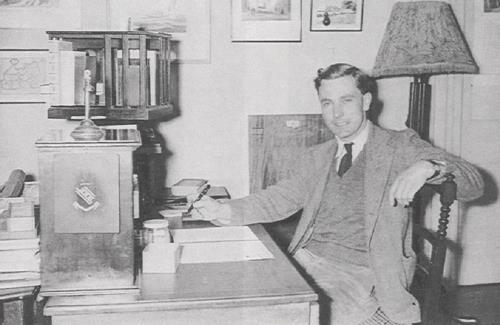 Crispin Hill, former head teacher of Aldro School in Shackleford and founding director of the Skillway project in Godalming from 1997, has died at the age of 84.

He was educated as a young boy at Aldro, where his father was headmaster before him, went on to Winchester College and then to Brasenose College (Oxford) where he studied for his MA in mathematics.

After the war, he saw service in the navy in Hong Kong and then returned to Winchester for a short spell to gain some teaching experience.

Mr Hill took over the headship in 1952 and devoted himself to the running of the school while teaching maths, science and scripture; his lessons were enjoyable and often contained much practical work.

He believed that education did not begin and end in the classroom but that education was life and needed “to open the boys to the richness of the world”.

Away from mainstream subjects, Mr Hill encouraged pupils in skills not often found in today’s curriculum which included carpentry, singing, gardening, and estate work to name but a few.

Having the benefit of a small lake within its grounds and being a keen oarsman himself, the boys had the rare opportunity of learning from Mr Hill how to row or even sail.

The lake and the school’s woods lent themselves to engineering projects and nothing made Mr Hill happier, nor indeed the boys, than building tree houses with pulleys attached for ‘death slides’ and constructing bridges over the lake.

For all the rich tapestry of education and activities offered at Aldro, Crispin never lost sight of the one principle he fundamentally believed: there was always something good about every child and it was the responsibility of educators to find that ability.

In 1972, Mr Hill married Christine who then helped him shoulder the responsibility of running such a happy family school. He retired from Aldro in 1984, but for Mr Hill, retirement was to prove as busy as Headship.

He was always keen on carpentry and shortly after his retirement, he assisted in building the Tythe Barn at Loseley House.

Then, after 10 years working at St Aubyn’s School in Sussex, the Trustees of the Warehouse Christian Trust presented Crispin with the opportunity of being director of a skills workshop project.

He took this vision of training for young people and made it a reality. He threw himself into the choice of workshop location and had the inspiration for both the Skillway name and logo.

He was a marvellous director to work under and was an inspiration to his management committee and the workshop manager. He was courteous in all his dealings and taught us all the art of good communication and the importance of good manners.

His wonderful ambassadorial qualities were much remarked upon and were put to good use in dealing with difficult situations or speaking to dignitaries or head teachers.

His local connections with people in high places served Skillway well and he had a list of Aldro alumni in his head, which proved most beneficial on the fundraising side.

Mr Hill was a man of great integrity, wisdom and character.

He has been described as the epitome of a Christian gentleman, with a great wealth of experience and insight into matters educational and spiritual. He will be missed by his past pupils at Aldro, by the young people he helped at Skillway, by his family and his many friends.