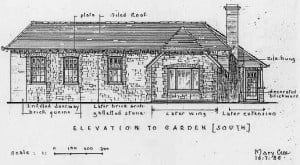 A double-pile single-story building of brick-size Bargate stone with galleting and breakpoints which has a hip roof with a central well. There are high ceilings and large windows. It was probably the estate laundry, later refurbished as a dwelling.

The building is set between the big 18th century house – now demolished – and the Malthouse, which had been at the parlour wing to an even earlier house. Our cottage is a single story building, constructed for the estate and said to have been the laundry. The walls are well built of carefully selected by Bargate stone and all of brick size, and so fitting with the brick quoins. There is galleting.

The inside now has partitions dividing the area into rooms. Two pillars support the central wallplate. These are simply set between front and back walls but are not centrally placed lengthwise. A similar two pillars were recognised in another laundry in north Surrey. There was a stream by the other laundry, so whether Owl Cottage was indeed a laundry has not yet been confirmed.

The partition wall dividing the front rooms from the back rooms is not cebtrally placed but is set to one side of the brick pillars, thus giving a larger living room and a slightly smaller entrance hall. But over the living room is a domed feature, centrally rising through the roof space but not quite centrally placed in the room. Within the roof space the structure is visible. It is quite substantial.

Seen in the roof space, the central wall plate is a very large squared piece timber which is missing between the two brick pillars. The rafters from both sides rest on it, and between them the wooden gulley, which was lead-lined, crosses from the central well to a rainwater pipe beside the front door.

Rafters are nailed to a ridge piece. Two spine beams are morticed into the central wall plate. That nearest the attic door has a carpenter’s assembly mark ’11’. Probably the beam on the other side would have been marked ‘1’. This was hidden by the central valley guttering. Just above is a little pulley attached to a rafter, under the central well.

There is a good fireplace fitted during re-furbishing. One extension has been added at the back and another on the east end.

This is an interesting building, constructed for a special purpose, not yet discovered, and recently converted into an attractive home.