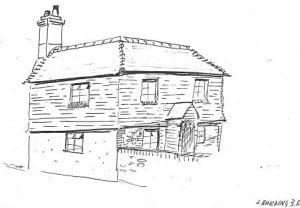 Halfway House is an isolated stone and tile-hung farm house of unusual plan, probably built in the late seventeenth century or early eighteenth century. A probate inventory of John Keene Yeoman, dated 1711 (see attached doc) may relate to this house which was formerly called Holmbush and is so called in the inventory.

The house stands half way across a fertile plateau above Eashing and is surrounded by its plough land. On the south side of the farm house is the farmyard, with the barn on the opposite side, and a milking parlour and open cattle byre and gate on the east and west sides. The farm lane crosses the fields. In old Estate maps Halfway House is named Holmbushe and it is still so called locally (1984).

The house has a hipped roof with a central valley. Rain collecting in the centre flowed through the roof and came out on the north side, into a pipe and down to the well.

Facing the road, the facade is almost symetrical, with one window on each floor on each side of the front door. The ground floor is of dressed coursed stone with galleting, and the upper floor is tile hung. The chimney rises uneasily within the back of the roof which is extended out to the stack. There is a modern single-storey extension on the north side and a store shed behind the chimney.

The front door faces the rough road to Godalming from Eashing. The door is not quite centrally placed in the stone wall. It leads directly into the hearth room which stretches through the house from front to back. The spine beam crosses from side to side and not to the hearth. This is a usual construction for a stone-built house. Stone houses were generally constructed in Surrey after 1650 when timber was becoming difficult to obtain for house construction. The hearth room is in the depth of the house with the inglenook hearth taking up the back wall with the stair door beside. The stair rises and extends beyond the partition wall. The present kitchen was, according to the inventory, a parlour with a little dairy or milkhouse and brewhouse behind. It is as described in the inventory. Upstairs are three bedrooms.

The bread oven probably extended out behind the inglenook hearth, though the oven has now gone and only the scar remains in the added garage at the back.

The plan is unlike the traditional Surrey house plan of the period, but it is economical of space and there is room for a good cupboard under the stair. The stairs rise to a small landing. A small half height window lights the stair.

The inventory lists the kitchen, which is now the living room, and the room over, There was a parlour which is now probably the kitchen. There was a back room and a chamber over which may be the present bathroom. The brewhouse and the room over are now missing. The brewhouse is usually detached, and it may have been somewhere behind the chimney stack where the garage now stands. The milkhouse will have been the little room on the north corner which comes under the backroom chamber. In Surrey stone for building was used after 1650 when timber became in short supply, but in Halfway House there is good timber in the upper walls, and the house retains good plank doors.

This is most interesting house. There are very few houses to which probate inventories can be related.

A gallery of sketches