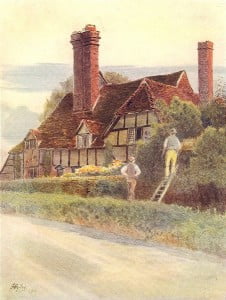 Originally a four-bay mediaeval timber framed house with two central bays open to the roof. The solar was jetted over the open hall. The roof structure is crown post, and the open truss crown post is moulded. The hall was part ceiled over and the smoke confined to the lower bay in the late sixteenth century. A brick chimney was inserted up to the open truss, leaving the cross passage behind, in the early seventeenth century, when the solar was replaced by a parlour wing with its own hearths. When the house was divided another hearth was built at right angles, blocking the cross passage.

The farm house was built on high land above the river, facing an equally old farmhouse across the way. The inserted chimney stack rises dramatically forward of the ridge. The roof of the old house is hipped with gablet and the wing has a half hipped roof with gablets. This wing has its own chimney in the outside which is now incorporated in a newer addition on this end. There is an extension on the other end.

Some timber framing remains outside, including the straight studs which had probably defined the original open hall long window. The wing shows square panel framing with corner tension bracing. Inside one of the arching braces remains in the end service truss. Arching braces indicate an earlier build than the corner tension bracing. Remains of a diamond mullion window remain under the tie A-A1, and in the front wall of this room over the service room is a groove for a sliding shutter. If the wind came through the open mullions another window shutter could be opened for light.